Couldn’t happen to a nicer guy! No, seriously! He’s a nice guy!

Choire Sicha is a very special human being. Just look at these Twitter mentions congratulating him on his new role as editor of The New York Times Styles section. It’s a trip through the past 20 years of New York media featuring an all-star cast of writers, many of whom he helped shepherd to fame (or at least a steady job).

Choire makes people feel good about themselves and their work, and this of course is what makes an editor truly great. Like any other nobody with a blog, I have my own Choire story: I started Longreads shortly after he and Alex Balk started The Awl, and he was supportive and encouraging from the start. (He also condemned me for not having Renata Adler anywhere on the site yet.) Great editors will save you from future embarrassment.

Notre-Dame Cathedral in Ottawa via Asif A. Ali on Flickr

Well, kittens, we’ve up and moved to Ottawa for the next few wintery months, a place where we have literally two connections to whom we are not related by blood, so we’re dusting off the Shebeen Club and looking for a new monthly home in the freezing-rainyest city on the planet.

We have also given the Facebook group a bit of a tune-up, with a fancy custom URL https://www.facebook.com/groups/TheShebeenClub/ and a call for new members and suggested venues. Our needs are simple.

For a Shebeen Club meeting, we need a room that won’t charge us for the space, but will supply waitstaff, foods and beverages, and be okay if everyone wants separate bills (everyone will). To start with, seating for a dozen should be adequate, and if it’s not, we’ll learn fast. Hopefully we can get to critical mass fairly quickly. We need this once a month, from about 6 to 9pm. We don’t need this for September, and probably not for October either, but for November, for sure.

We also need you to invite your literary friends who live in Ottawa, since right now our Ottawa membership consists of: me.

Let’s do lunch (on me!) at Social Media Camp this May in Canada’s prettiest city. And with this special discount code, save $100 on registration!

Who likes free lunches? EVERYONE! Who likes saving money? Pretty much those very same people! Now you can attend Canada’s biggest and best purely social media conference in one of the world’s prettiest cities, save $100 on registration, and have lunch on and with me. Given the number of lunches other people have bought for me, it’s kinda the least I can do.

Yes kittens, I’m headed back to the #YYJ for another Social Media Camp, Canada’s largest social media conference, in gorgeous downtown Victoria. I know that’s a cliche, but it’s literally true and I don’t know anyone who isn’t thrilled at an excuse to go to this spectacular city.

This year I’ll be speaking on Marketing the Mystery; in other words, how to use social media to drum up interest in something when you’re not actually allowed to say… 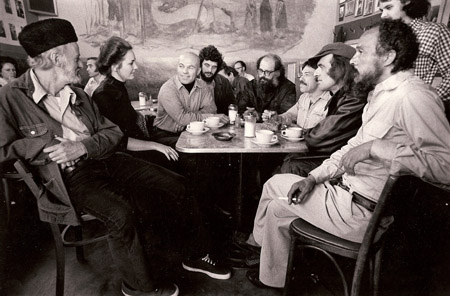 You can’t Beat our Poets!

Join us for the Shebeen Club Reunion Tuesday, October 20 at 6pm in the Shebeen, behind the Irish Heather, 210 Carrall Street, Vancouver.

Dust off your berets and your Moleskines, the Shebeen Club is back, bitches! Come out to the back corner of the Shebeen on Tuesday, October 20th at 6pm and let us know what you’ve been up to in the what? THREE years since we’ve had a meeting. No cover, pay for what you order, and don’t forget to tip your waitstaff generously. 90% of us were them once.

Any politically-aware media addict Americans out there looking for a high-profile gig in journalism? This is it, my friends. Expect to work like a dog, and party like one too, when you drop the name Mediaite.

Mediaite is looking for an ambitious, energetic, newshound to cover the names, the brands, the gossip, the digerati of news, politics, and entertainment. This person will be one of our reporters and opinion writers.

You’ll be responsible for writing news stories using any and all of the tools of digital storytelling: Words, video, pictures, social interactions, book excerpts, you name it. In addition, for this position, you will be responsible for tapping into conservative media to see what is trending among right-leaning thinkers, and add your own thoughts via regular opinion pieces.

If you think you have what it takes and want to impact the news cycle then we want to talk to you.

The ability to work out of our New York offices is preferable, though a Washington, D.C. location would not be terrible (or would it?).

Send us an email (jobs@mediaite.com) with your resume and cover letter explaining why you’re suited for the position. Please include links to articles you’ve written and edited.

Mediaite is the site for news, information and smart opinions about online, broadcast and print media and entertainment, offering original and immediate assessments of the latest news as it breaks.