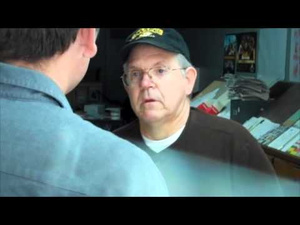 Duane Lester is a blogger. Duane Lester knows his rights. And when he found out that this Missouri paper had printed a blog post of his as an original article, verbatim and without attribution or permission, he knew just what to do. And he videoed that shit.

I know RSS stands for “really simple syndication” but it does not mean you can take anything with an RSS feed and print it, verbatim, without permission or payment, in your newspaper, no matter how podunk it may be. Blog posts are writing, covered by copyright law, and if this had been me I’d have gone considerably more ballistic to Mister Bob Bull Shit and his Lois Lane sidekick, who should really know better. Bob’s the one with the money, and she’s the one with the brains, I’d bet.

One relevant item in Duane’s attitude is: he never changes subject, never stops repeating that they reprinted his work w/o credit or payment, never falls for the argumentative traps of “being from somewhere”, “copies being passed around”, “40 years older” or whatever. Keeping straight to the point helps. Not being sidetracked helps. Pursuing it steadily, keeping CALM eye contact, helps. Kudos on that.

Congratulations to Duane and to SrAtoz. You give us heart!

Whatever you have to pitch to the media for coverage — your band’s new record, your new publishing company, the fact you won a big shiny award — it’s not always easy to attract their attention. While different media outlets and platforms have their idiosyncrasies, there are general rules and techniques that always work (and not necessarily include tucking a bottle of whisky into the package, although that does help). Come to the June Meeting and learn or re-learn the rules, share your own tips about successful pitches, and generally sharpen your pitching techniques.

As always, tickets are $20 in advance [Eventbrite Link] (available ’till June 16th) or $25 at the door, and that includes dinner and a drink. The venue for this month’s event only is the Shebeen Whisk(e)y House, in a separate building behind the Irish Heather at 210 Carrall Street, just steps from Maple Tree Square. For our July Event, we will return to Revel Room (238 Abbott Street just south of Gastown)

UPDATE Nº1: Menu is as follows

PLEASE NOTE: The Shebeen Whisk(e)y House has a maximum capacity of 60 people, and we’re already half-way there. BUYING YOUR TICKETS IN ADVANCE IS A SMART MOVE.

UPDATE Nº2: WALK-UPS ARE OF LIMITED CAPACITY, DUE TO KITCHEN CAPABILITIES. Chances are if we run out of the above items, you can bob into the pup proper after the presentation and grab a bite there, having then given the cooks a chance to catch their breath.

Stephen Quinn began his reporting career in 1996, after graduating from BCIT’s ‘Broadcast Journalism’ program. During his last year of school, he interned at CBC’s “As it Happens” in Toronto during the last Quebec referendum. He returned to Vancouver and was hired by CKNW as a general assignment news reporter where he spent more than four years covering various court cases, crime stories, breaking news and Vancouver City Council.

In 2000, Mr. Quinn was hired by CBC Radio as a civic affairs reporter. He covered Vancouver City Council, Translink, the GVRD Board (now MetroVancouver) and other civic issues.

He was also an occasional guest host of CBC’s local current affairs programs “The Early Edition”, “B.C. Almanac” and “On the Coast”. He co-produced and hosted a radio series on the 2005 provincial election campaign which won the RTNDA’s ‘Ron Laidlaw Award for Continuing Coverage’. He was also the recipient of the RTNDA’s ‘Gord Sinclair Award for Special Programming’ in 2009. Mr. Quinn has also been part of numerous award-winning newscasts and has received one honourable mention from the Jack Webster Foundation. He is creator of “Quinn’s Quiz”, a popular radio segment that first appeared on “The Early Edition”.

He has guest-hosted “Freestyle”, “Sounds Like Canada”, and “Q” for CBC National Radio. He has also produced and hosted a series on the media for CBC’s “The Current”.

In 2008 he was hired as the host of “On the Coast”, CBC Radio’s local afternoon show in Metro Vancouver.

Mr. Quinn grew up in Ottawa, Ont. where he attended Lisgar Collegiate Institute. He moved to Vancouver in 1983.

All TALKING! All THINKING! ALL HOUR LONG!

Tomorrow at 17:00 PDT (or 20:00 EDT, or barely into Wednesday at 00:00 GMT) you can hear the organizer of The Shebeen Club interviewed on Blog Talk Radio with Wayne Herlbert. In addition to the possibility he’ll mention an up-coming title or two for his publishing house, here’s what Mr. Herlbert is claiming will be discussed:

Independent book publisher and President of Atomic Fez Publishing, Ian Alexander Martin, shares his views on current and future trends in the publishing industry. Ian describes the challenges facing publishers in the current economy and with the rapid changes taking place in the publishing industry. Ian shares his thoughts on genre busting fiction, developing a niche market for specific titles, and how an author can get published in today’s highly competitive marketplace. Ian also offers some advice for successful online book marketing including some very unique and unexpected tactics for which Atomic Fez has become famous.

Frankly, it might be a bit of a stretch to say that “Atomic Fez Publishing has become famous”, but we’re hardly going to dissuade Mr. Herlbert at this point.

The interview is an hour long, so Ian will have to work at being briefer than normal. More than likely, about half-way through everyone will get far off the subject and start debating the various advantages of tea-making techniques. Also possible is comparing of the cinematic visions of Akira Kurosawa v. Francis Ford Coppola or Terry Gilliam v. Orson Welles.

UPDATED: and we’re done! For those of you who missed it, head TO THIS PAGE and click the little button on the player to start the 66 minute babble. Or, if you’re into that sort of thing and would rather download it and play it as a podcast, HERE’S A LINK FOR THAT.

This is sweet, particularly given that ALL WordPress.com blogs are technically “published” in the US and thus qualify for consideration. The Sidney Hillman foundation, source of the prestigious, annual Hillman award, is now offering the Sidney, a monthly award of $500. Here are the deets from the application page:

For more than 50 years, the Sidney Hillman Foundation has awarded, annually, the prestigious Hillman Prizes in Journalism. In 2009, the Foundation inaugurated the Sidney, a monthly award for an outstanding piece of socially-conscious journalism. We are looking for investigative work that fosters social and economic justice.

Deadlines are the last day of the month in which the piece was published/aired. In the case of magazines, please nominate according to the issue date on the publication, not when it first appeared.

You may submit your own work or nominate someone else’s.

Whenever possible, please provide the full text of the story you are nominating, either in the body of your email or as an attachment, as well as the URL.

The Foundation will announce each month’s winner on the 15th of the following month. Recipients will be awarded $500, a bottle of union-made wine, and our certificate designed by New Yorker cartoonist, Edward Sorel.

I love that “union-made wine.” That says so much, right there. You have to fill out the form on the page, so don’t hang around here, go do it!