Got this in my regular VOX email from the Federation of BC Writers, a terrific group that, if you are a BC writer, you really should join! 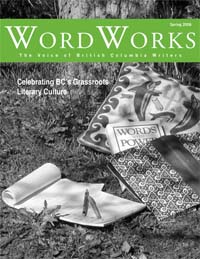 Winners will be read their pieces at the Word On The Street Festival in Vancouver on September 26, 2010.
The competition is open to all BC writers and residents.
Entries must be original work, not previously published in any form. Copyright remains with the author.
Maximum 2,000 words per entry. No limit to number of entries.
Blind judging in effect: do not include your name on the manuscript.

Manuscripts should be typed, double-spaced, 12 font, Times New Roman, pages numbered consecutively and stapled together, title in the footer of each page. Include a cover letter with your name, address, telephone, e-mail and the title of your piece(s).

Manuscripts will NOT be returned; they are destroyed at the end of the competition.

No e-mail submissions.
Contest results posted on The Federation of BC writers website in September 2010.

Entry fee: $15 for Federation members and $20 for non-members. There is no limit to the number of entries an individual may submit but each entry must be accompanied by the entry fee. A person may win only one prize.

Make cheque payable to The Federation of BC Writers.
All contest entries must be postmarked by July 25, 2010

May the best BC writer win! (of course, that’s me, right?)

This site uses Akismet to reduce spam. Learn how your comment data is processed.